If I’m being honest, I do my best not to think of her too often.  I try very hard to plug along through life not truly acknowledging that something is missing. But something has always been missing. In part I avoid the hurt that her absence brings me because of the people in this world. I’ve come across many of them that believe that my loss is less than, because I was only a year old when she died. They believe that since I didn’t really have a chance to know her that my loss is somehow less significant than that of a person who lost their mother (of father) after having years upon years with them.  Please don’t misunderstand; I know that they are wrong. I know that they don’t know my struggles, both now or when I was growing up. They don’t know of all of the times as a teenager that I needed to talk to her; that I sat in my room asking God why I wasn’t good enough to deserve her. I know that they have no idea how substantial the emptiness in my heart can be.  On the easier days, I will humor them, but most days they speak from ignorance. Some speak from a place of judgment and still have their parents, while others speak from the threat that my pain infringes on theirs. Either way they are wrong. But, nonetheless, their roll of the eyes aimed at the timing of my loss is enough to silence my hurt. Sure, I tell them exactly what I think of their opinions. I tell them as I’m driving down the road, venting to myself. I tell them as I roll my eyes right back at them, but all of the rest of the time, I suppress. I suppress because its’ easier not to think of her. It’s easier not to think of all that my children, husband, father, aunt and I have already missed and will continue to miss.  It’s easier not to picture her at all…or is it?

I’ve found that I don’t allow myself to be sad over her very often. I have no problem bursting into tears when a restaurant discontinues my favorite meal from their menu, but sobbing because I don’t have my mommy? For some reason it makes me feel weak, as if the strength that I need to have for others in my life will be compromised if they see that wall come down.  I know what you’re thinking, “your strength comes from your weakness.” Well that may be true but, that’s not how it feels.

Would she have loved my babies the way that I believe a grandmother should? Would she be the one person that could meet those expectations? Would she pick them up from our house out of the blue to take them on a date? Would I be a better mother if I knew her as my own? Would she show them love equally while loving them differently the way they would need her to?  Do I?

As I’ve entered this stage of life, you know the one with the husband and the two kids, I’ve realized that what saddens me more than anything is all of the things that we’re missing. The people that I love the most will never know the greatest person that I’ve never known. My father will never get to celebrate a 40th wedding anniversary, My husband will never know the source of my strength or see where I get my charisma, my kids will never know what it’s like to have a grandmother that wants shower them with ALL of her love and I’ll never get to sit back watch as those bonds unfold. I miss what will never be, constantly. I ache; and when I’m alone I cry.

I hold stories of her close to my heart. Stories and pictures of her are all that I have. One of my favorite stories is one that my Aunt shared with me many years ago. My mom was a little wild, a rebel if you will (I can’t help but giggle when I think of that). As everyone went to sleep one night, my mom had plans to sneak out of the house, I’m sure to go be the life of the party somewhere. She thought she was slick, and she was.  Apparently, my grandmother was on to her and found her bed empty after she went in to check on her. So, like any good mom would do, she tucked herself into my mom’s bed for the night and fell fast asleep.  Her intentions were to catch my mother sneaking back in and bust her on the spot! Only my mother was cleaver. She snuck back into her room, found my grandmother in her bed and decided she would leave her there and go sleep in my grandmother’s bed instead.  I like to believe that was the moment that the student became the teacher! For me, this was a glimpse of who she was. It’s hard to explain how I could love someone so deeply that I only had for a short time, but I do. I love and miss her deeply.

She had a smile that could brighten anyone’s day. She had charisma that could win you over in the first few seconds of meeting her. She loved to have fun and was the life of the party. She was kind and thoughtful and had a heart that held so much love for others. At least that’s what I’ve been told.  She was a daughter, sister, wife, mother and friend to many. Her story ended when she was twenty one years old and because of her my story began.

From Sinner to WinnerThe Full Embrace 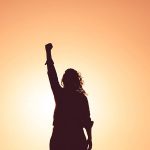 You Are A WarriorThe Full Embrace